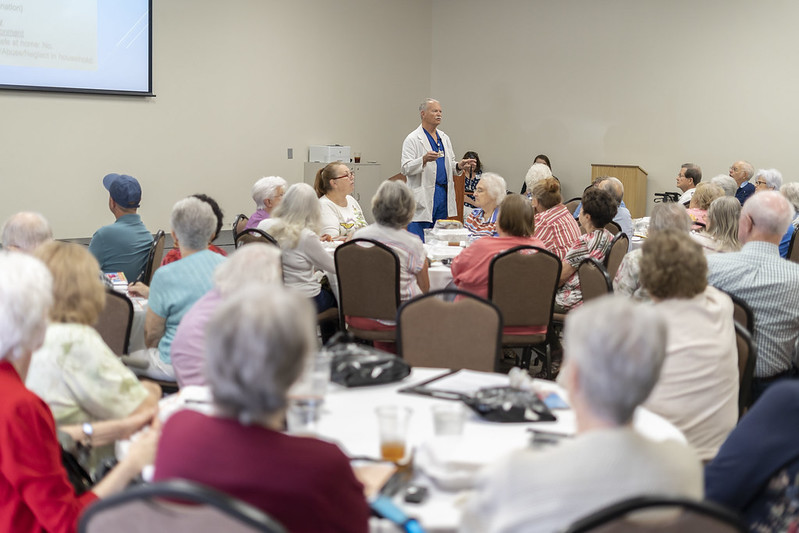 Dr. Scott earned his medical degree from Augusta-based Medical College of Georgia and also received a graduate degree from Tulane University School of Medicine. He completed his residency training at UCLA and the Hughston Orthopedic Clinic and went on to found Georgia Sports Medicine here in Tifton in 1983. The practice and surgery center was acquired by Tift Regional in 2015.

“Dr. Scott is a true healthcare pioneer—not just here in our region, but for the entire state and country. For more than 40 years, he has been instrumental in making Tifton an orthopedic center of excellence,” said Christopher Dorman, Southwell President and CEO. “We were happy to have him on our team at GSM, and we wish him well in retirement.”

During the course of his career that spanned more than four decades, Dr. Scott championed the latest in surgical techniques and medical technology, performing hundreds of joint replacements and arthroscopies each year. He was also instrumental in sponsoring and coordinating the annual Sports Medicine Seminar, an event held in Tifton for area coaches, trainers, athletes, and medical professionals.

Dr. Scott joined the board of Tift Regional Health System, Inc. (TRHS) in the summer of 2019 and plans to continue to serve as a board member during his retirement.

Over the course of his career, Dr. Scott has served as a president and board member for the Georgia Society of Ambulatory Surgery Centers and was appointed by former Georgia Governor Nathan Deal to serve on the Georgia Board of Athletic Trainers. He has been profiled in Orthopedic Technology Review as a leading practitioner of state-of-the-art orthopedics and has been invited to be a lecturer and instructor all around the globe. He has served as president of the Georgia Orthopedic Society as well as the president of the Society for Arthritic Joint Surgery. In 2015, he was recognized by the Georgia Orthopedic Society to receive the Jim Funk Distinguished Service Award presented for demonstrating an exemplary commitment to musculoskeletal humanitarian activities and contributed significantly to improving the practice of Orthopedic Surgery.

Dr. Scott was also the recipient of the John B. Prince, III Distinguished Service Award in 2018, which was established by Tift Regional’s Guest Relations Committee in 2003 to recognize a longstanding associate of Tift Regional who is also a leader in the community, using their influence over the years to help further the mission of the hospital.

Throughout his busy career, Dr. Scott has also continued to travel to Guatemala and El Salvador frequently to donate his professional orthopedic services to underserved patients in those countries. In the 1980s, Dr. Mac Freeman, a former associate of Georgia Sports Medicine invited Dr. Scott to go to Guatemala to perform surgery with Central American doctors and that effort has lasted over 30 years. Dr. Scott and Dr. Guillermo Claverie started Fundaorto and American Surgeons for Central America. Fundaorto has performed over 4000 hip and knee replacements for indigent patients. Surgeons from Central America have spent up to 1 year in Tifton to study then return to Central America. Surgeons from the USA travel to Guatemala and Salvador to operate and teach. The doctors at Georgia Sports Medicine were all involved in the program that has been supported by TRMC.

Over the years, surgeons from Russia, Japan, Salvador, Venezuela and other countries have visited Tift Regional Medical Center to observe surgeries done with new instruments and techniques developed by Dr. Scott.